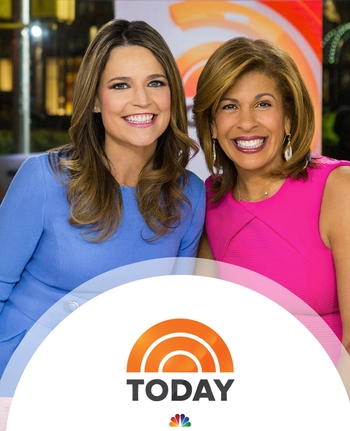 Left to right: Savannah Guthrie and Hoda Kotb.
"From NBC News, this is Today, with Matt Lauer and Meredith Vieira, live from Studio 1A in Rockefeller Plaza."
—Weekday opening from September 2006 to June 2011, as read by Les Marshak
Advertisement:

A long-running morning news program on NBC. It debuted as The Today Show in January, 1952. Airs from 7:00 A.M. to 11:00 A.M. Eastern time. Directly competes with CBS's CBS Mornings and ABC's Good Morning America, and so far is the only one of those three shows to be four hours in length.

Like its competitors, Today airs more than just news. It's more like a variety show with some news thrown in. Among the more notable segments:

The fourth hour of this show, active since September 2007, is slightly different from the first three. Hoda Kotb and Kathie Lee Gifford do a show that's more similar to The View. Among their more notable segments:

There are also lesser-known Saturday and Sunday editions of this show, anchored by Lester Holt and Jenna Wolfe. The Saturday edition has only one notable segment:

That's what's going on around the country; here are some of the tropes being used in your neck of the woods: