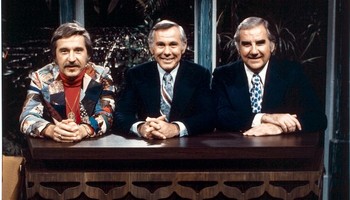 It originally aired during late-night. For its first decade, Johnny Carson's The Tonight Show was based at 30 Rockefeller Plaza, New York City, with some episodes recorded at NBC-TV's West Coast studios in the Los Angeles suburb of Burbank, California; on May 1, 1972, the show moved to Burbank as its main venue and remained there exclusively after May 1973 until the end. Along the way, the show's massive popularity made it the Trope Codifier for the talk show format in general, as well as a major influence on every talk show that followed it.

Due to the overwhelming amount of episodes over three decades, home video and digital releases have only highlighted a small handful of the show's content, and for a while when the show was rerun as Carson's Comedy Classics, it only highlighted select sketches in a half hour format. However, on January 2016, the series finally started rerunning on Antenna TVnote albeit under the title Johnny Carson, as NBC still retains the rights to the Tonight Show brand. In 2020, the series also began live streaming on Shout! Factory TV

as The Johnny Carson Show, featuring episodes with particularly famous/popular guests, Joan Embry and animals from the San Diego Zoo, and the like.

President Reagan gets confused by some confusing names

President Reagan gets confused by some confusing names