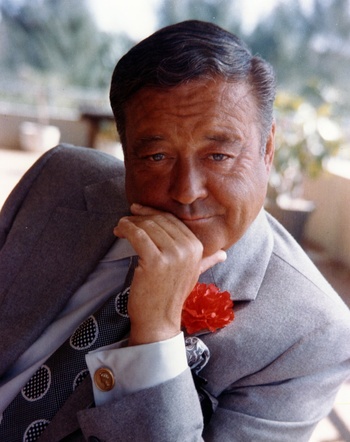 "And awaaay we go!"
Advertisement:

Gleason was known for his brash visual and verbal comedy, as exemplified by his portayal of blowhard bus driver Ralph Kamden in the classic 1950s sitcom The Honeymooners. He is also remembered for his Academy Award-nominated performance as master pool shark "Minnesota Fats" in The Hustler (1961), and for his role as the foul-mouthed Sheriff Buford T. Justice in the Smokey and the Bandit films. Gleason also recorded a series of popular easy listening albums in the '50s and '60s.

Gleason is one of several individuals known by the sobriquet "The Great One". His grandson, Jason Patric, is also an actor.

Not to be confused with Jack Gleeson.