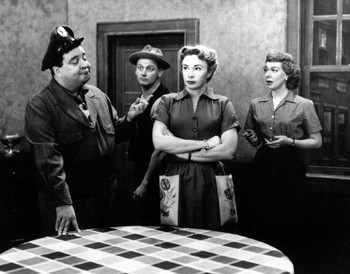 Originally broadcast for one season (1955–56) on CBS, The Honeymooners chronicles the sometimes madcap, sometimes touching life of big-mouthed but soft-hearted bus driver Ralph Kramden and his sarcastic wife Alice, who live in a cold-water walk-up apartment in Brooklyn (based on Jackie Gleason's childhood home at 328 Chauncy Street), and their friends and upstairs neighbors, sewer worker Ed Norton and his wife Trixie. Ralph and Norton are constantly getting embroiled in one crackpot get-rich-quick scheme after another.

Born out of a series of recurring sketches on the variety-format series The Jackie Gleason Show (many of which were preserved on kinescope and rather misleadingly touted as "lost episodes" decades later), The Honeymooners was eventually spun off into its own program, starring Gleason as Ralph, Art Carney as Norton, Audrey Meadows as Alice, and Joyce Randolph as Trixie. (Pert Kelton had originated the role of Alice in the Jackie Gleason Show sketches, but was blacklisted during the HUAC "Red Scare" and forced out of the cast. Uncle John's Bathroom Reader claims that Kelton's official reason for being fired was that "her boobs were too big", while Wikipedia's page on Kelton

claims that it was due to alleged heart problems. Trixie, for her part, was briefly played by Broadway singer/actress Elaine Stritch.)

Along with I Love Lucy and The Goldbergs, this is one of the ur-SitComs from the early days of television. While a one-season affair as a standalone series (it regularly got trounced in the ratings by The Perry Como Show on NBC during its initial network run), it remained a part of Gleason's reconstituted variety show until the end of its run, found a second life in ubiquitous syndicated reruns, and became a certified cultural icon, widely imitated (most notably The Flintstones, which aside its' Stone Age setting was more or less an Animated Adaptation) both in Hollywood and abroad. (There have been at least two Swedish versions, for instance.) In the late '70s ABC aired four hour-long Honeymooners reunion specials, including one for Christmas and one for Valentine's Day.

Years later, the show's legacy continues to live on: In 2002 CBS aired a made-for-TV biopic called Gleason, starring Everybody Loves Raymond 's Brad Garrett as The Great One—one scene of which features Gleason creating the basics of The Honeymooners along with his other characters. In addition, a film adaptation with an all-black cast (including Cedric the Entertainer as Ralph) was released in theaters in June 2005, though this iteration wasn't very well-received. In 2017, the show was adapted into a stage musical that premiered at New Jersey's Papermill Playhouse.