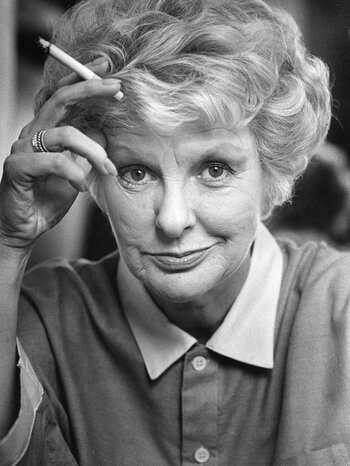 Elaine Stritch (February 2, 1925 – July 17, 2014) was an American actress and singer. Originally from Detroit, she moved to New York City to study acting at the New School, where her fellow students included Marlon Brando and Bea Arthur.

Stritch appeared on Jackie Gleason's variety show, playing Trixie Norton in one The Honeymooners sketch before the role was reassigned to Joyce Randolph. In the coming decades, however, she would primarily make her name in the theatre, earning a Tony Award nomination for Edward Albee's A Delicate Balance and giving showy performances in the Stephen Sondheim musicals Company and Follies. She would eventually win a Tony in 2002, for her one-woman show Elaine Stritch at Liberty.

Stritch lived in the United Kingdom for much of the 1970s and early '80s, during which time she starred on the sitcom Twos Company and was a regular reader for the children's series Jackanory. Notable roles following her return to the United States included the films Out to Sea and Small Time Crooks and her recurring role on 30 Rock as Colleen Donaghy, mother of Alec Baldwin’s Jack Donaghy. The latter won her an Emmy Award.

Stritch died in 2014 in the Detroit suburb of Birmingham, Michigan. She had been married to actor John Bay from 1973 until his death in 1982. The actor Ed Lauter was her cousin.