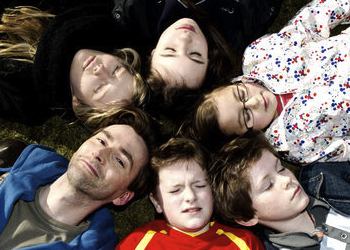 Single Father is a BBC mini-series about a recently widowed father of five starring David Tennant.

Set in Glasgow, Single Father follows Dave as he deals with the sudden death of his long time partner, Rita. He is left with the four children they were raising together: Lucy (15), Rita's daughter from a previous relationship; and their three biological children: Paul (11), Ewan (9), and Evie (5). Other major characters include Rita's best friend Sarah, who steps in to help Dave with the kids as much as possible, Dave's other older daughter from his previous marriage (Tanya, herself a mother) and Anna, Rita's adoptive sister and her husband Robin.