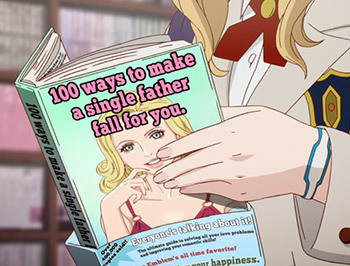 Trying a bit too hard there, girl.
Advertisement:

Behold the young bride, blissfully happy with her husband (or sometimes not...) until he dies before his time. Now she's single again, but disinterested in romance. Either her former husband was a jerk, and she no longer trusts men, or she loved her husband so deeply that no suitor can compete with his (possibly rose-tinted) memory. A third possibility is that the widow is hesitant to form bonds again because she is afraid of suffering the pain of that loss a second time.

But lo! Enter our protagonist, who wins her heart with his patient ways and teaches her to love again. This is of course a romance trope. Can be a way of bringing in an "older woman" love interest. Once she moves on, the old husband will rarely — if ever — be mentioned again.

Can face complications when dealing with the False Widow.

A form of Second Love. Compare Comforting the Widow, when the lover starts putting on the moves way too early, and the Black Widow, where she's single and there's a very good reason for that.

Word of warning to all time-travelers: This could result in you becoming your own Grandpa.

Often Truth in Television today and especially in past centuries, when shorter lifespans and a greater risk of dying in early adulthood (either in war or of disease) meant that it was common for people to remarry at least once in their lifetimes due to the death of their spouses. To cite just one famous historical example, James Madison hooked up with Dolley Payne Todd this way after her husband died during the yellow-fever epidemic that hit Philadelphia in the mid-1790's.