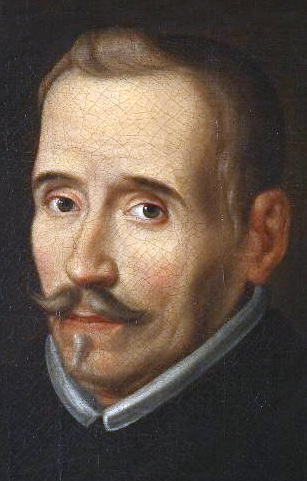 The Phoenix of Wits
Advertisement:

Felix Lope de Vega y Carpio (25 November 1562 - 27 August 1635) was a writer of the Spanish Golden Age, best known as a playwright. His importance in Spanish Literature is often rated second only to Miguel de Cervantes (his Sitcom Arch-Nemesis).

One of the most prolific writers in human history, he is credited as the author of 3,000 sonnets, nine epic poems, three novels, four novellas, and over 400 plays. That's not counting the numerous works that have been lost, with some putting the number of his missing plays at over 1,000. As a result, Lope's work is very inconsistent, but he probably still has more masterpieces to his name than most playwrights have plays.

Lope was a populist author who believed in writing plays that would appeal to the common people. While this could sometimes result in Lowest Common Denominator works, it also resulted in innovative plays that moved away from the classical idea of Aristotelian Unity, which Lope thought the common people didn't care about.

He also had a very interesting personal life: serving with the Spanish Armada, being sentenced to both prison and exile, having numerous love affairs (even after becoming a priest), and suffering family tragedies.