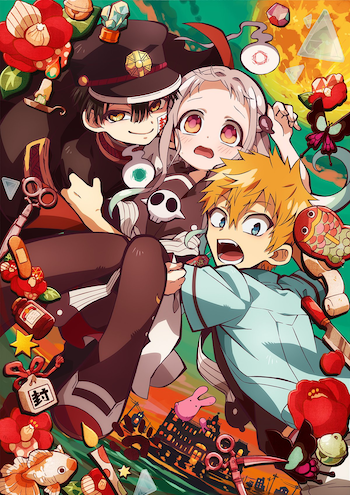 From left to right: Hanako, Nene Yashiro, and Kou Minamoto

Like many Japanese schools, Kamome Academy has its Seven Mysteries that are popularized by student rumors. The seventh mystery is Hanako-san of the toilet

, the ghost of a girl who died in a bathroom years ago and can grant any wish for a price. Nene Yashiro, a first-year high school girl who desperately wants her senpai to return her feelings, decides to take a chance and summon the mysterious Hanako-san...only to discover that despite the very feminine name, Hanako is actually a boy. Through a turn of events, Nene becomes Hanako's assistant and helps him maintain balance between the human and spirit worlds.

An anime adaptation made by Lerche began airing on January 9th, 2020.