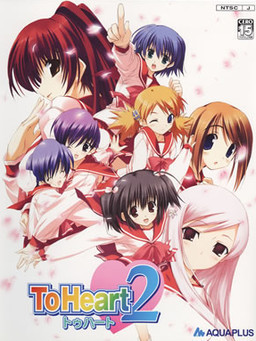 To Heart 2 is a Japanese Visual Novel developed by Leaf. It is a sequel/spin-off series of sorts to To Heart; it is set in the same universe, albeit two years later with a completely new set of characters.

The story follows Takaaki Kouno's daily life in high school alongside his childhood friends Konomi Yuzuhara (who just graduated from middle school) and Tamaki Kousaka. The story follows the same lines as the original To Heart, where Konomi's feelings for the male lead blossom.

The series also has an adult Gaiden Game, To Heart 2: Another Days, that focuses on the secondary characters of the series.

A thirteen-episode anime series adaptation produced by Oriental Light and Magic and directed by Norihiko Sudō aired in Japan between October 3, 2005 and January 2, 2006. It was subsequently followed by three OVAs in 2007, two more in 2008, another two in 2009, and yet another two in 2010.

For some strange reason, somebody made a CGI short featuring the characters, by the name of Funky Cat Maybe

. It's basically a Zombie Apocalypse but with Puni Plush dancing Cat Girls instead.

More recently, Aquaplus (Leaf's partner that releases Family Friendly versions of the To Heart games to the consoles) developed and released an Eastern RPG adaptation, titled To Heart 2: Dungeon Travellers

for the Playstation Portable, featuring all the girls up to Another Days in a fantasy setting (yes, even the Robot Maids are there too), which in turn was adapted into an OVA in early 2012. To Heart characters also appear in Leaf/Aquaplus' fighting game collaboration with Examu, Aquapazza.