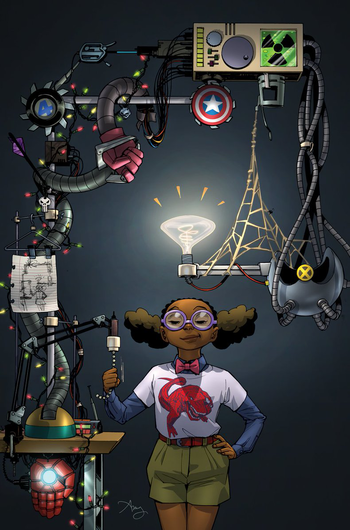 The Teen Genius is just that: a genius who happens to be a teenager. This character is responsible for coming up with the magical answer to any given episode's problem, while at the same time being generally angsty and teen-like. May be exposed to discrimination by those that don't know them, because they're Just a Kid.

Oddly, the Teen Genius will not normally have any of the odd behavioral quirks of the TV Genius, even if the series lasts long enough to let them mature into an adult. A version of where smart kids and teens can relate to their maturity, they are Wise Beyond Their Years.

On a show with an ensemble cast, the teen genius is usually included as a (generally misguided) attempt to appeal to a teen audience. On a show with a teenaged Competence Zone, this is about the only way for the Five-Man Band to include The Smart Guy.

A Teen Genius may sometimes also be Book Dumb, despite the apparent contradiction. A female Teen Genius may be a Ditzy Genius or Genius Ditz. A younger version is the Child Prodigy.