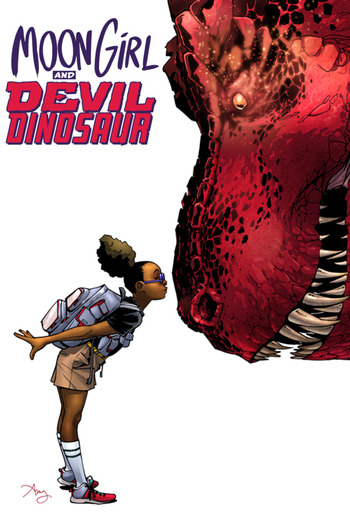 Moon Girl and Devil Dinosaur is a 2015 Marvel comic book, published as part of their All-New, All-Different Marvel initiative. It's written by Amy Reeder and Brandon Montclare (Rocket Girl), with art by Natacha Bustos.

Lunella Layfayette is a brilliant young girl living in New York City, often found tinkering with gadgets of her own invention. Despite her genius intellect, Lunella's peers tease her for being a dreamer, calling her names like "Moon Girl." As if being an unpopular, super-smart kid weren't enough to deal with, she's also aware of an disturbing truth about herself: that she's a latent Inhuman.

Elsewhere, in the Valley of The Flame on Earth-78411, fire-breathing Devil Dinosaur witnesses the death of his friend Moon-Boy at the hands of the rival Killer-Folk tribe. When an Omni-Wave Projector developed by the Kree teleports the Killer-Folk to present-day Earth-616, Devil Dinosaur follows them, meeting Lunella in the process.

Though Lunella is successful in helping Devil Dinosaur fight the Killer-Folk, she's soon exposed to a gust of Terrigen Mist, effectively launching her dreaded Terrigenesis. When she awakes, nothing seems to have changed about her... until she discovers that her Inhuman ability is body-swapping, seemingly activated in moments of intense emotion. Her first partner? Devil Dinosaur himself.

Together, Lunella and Devil joined the new Secret Warriors during Secret Empire, working alongside the likes of Ms. Marvel, Quake, and Karnak. Lunella also became a member of the so-called "Fantastic Three" with The Thing and Human Torch, for a brief moment.

An animated series starring the duo was greenlit by Marvel Animation in 2018, with Laurence Fishburne's Cinema Gypsy production company overseeing the project at Disney Television Animation. Conversely the comic ended in Oct 2019.