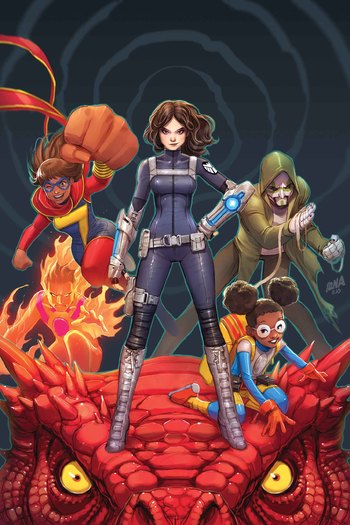 Secret Warriors is a 2017 comic book published by Marvel Comics, written by Matthew Rosenberg with art by Javier Garron and covers by Tradd Moore.

Launching out of Inhumans vs. X-Men under the ResurrXion banner, Secret Warriors is one of the titles shaking up the status quo of the Inhumans, who've seen lots of focus since 2014's Inhumanity. While sister title Royals is focused on the Inhuman Royal Family, Secret Warriors features the "Nu-Humans" of Earth, whose latent Inhuman genes were activated when Terrigen Mist was introduced to Earth's climate.

Inspired by its original namesake, Secret Warriors follows a team of Earth-based Inhumans (original founding member Daisy Johnson, Kamala Khan, Moon Girl and Devil Dinosaur, Karnak, and Inferno) who join forces to protect their kind from extinction —after the events of IvX— clandestinely.

Tying into Secret Empire for its opening arc, Daisy forms the new Secret Warriors in light of HYDRA's takeover of New York City by Steve Rogers, who invokes Inhuman internment camps that she intends to liberate innocent Inhumans from now that the Royal Family isn't around to intervene.

Along the way, Daisy recruits Ms. Marvel, Moon Girl (with Devil Dinosaur!), and Inferno — as well as Karnak, a member of the royal Inhumans who opted to stay on Earth when they vacated the planet.

An animated film adaptation loosely based on this version of the team, titled Marvel Rising: Secret Warriors, debuted in 2018, featuring Quake, Ms. Marvel, and Inferno as members.