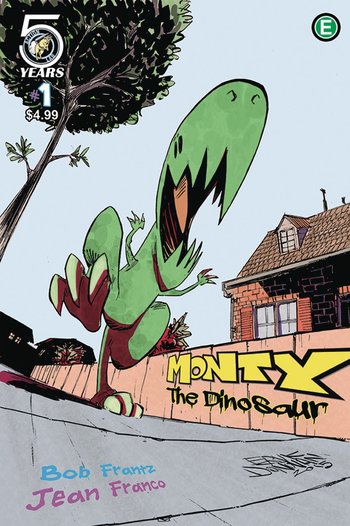 Monty The Dinosaur is an all-ages Comic Book by Bob Frantz and Jean Franco.

Monty is a dinosaur. And he can talk (he states that all dinosaurs could talk, it's just that humans weren't around to hear it). All he wants is a friend. Problem is, whenever people see him, the typical reaction to his appearance is screaming and running away in fear. As a result, Monty is pretty lonely.

However, that all changes when he meets Sophie, an 8-year-old girl who is the only person who doesn't scream and run away. The two become friends, and now Sophie and Monty have many adventures together in living in their neighbourhood.

Monty The Dinosaur contains examples of: