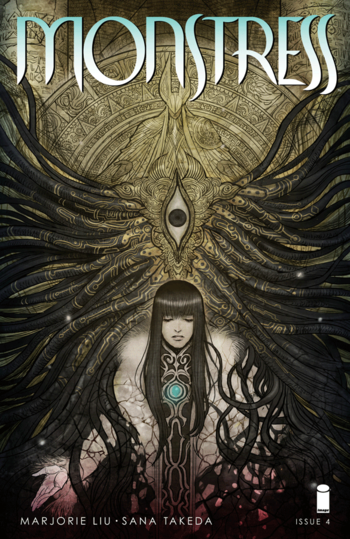 This is one of the less elaborate covers.
"There's more hunger in the world than love."
— Maika Halfwolf
"Yes. Miss Halfwolf scares me a lot. But that doesn’t make her a monster. Don’t be like the witches, Master Ren. They call us monsters because it makes it easier to hurt us. But monsters are people, too."
— Kippa
Advertisement:

Set in a fantasy world modelled after 1900s Asia with magical, steampunk, and Ancient Egyptian elements, the time is during a truce between the Federation of Man (humans) and the Arcanic Empire (hybrid offspring of the beastlike Ancients and humans). But thanks to an order of human witch-nuns called the Cumaea, who rule the Federation of Man with manipulation, propaganda, threats, torture, coercion, and a well-placed murder here and there, open conflict increasingly seems inevitable.

Both sides commit atrocities regularly. The humans take Arcanic slaves. The Cumaea go even further and use Arcanic body parts to make a magical potion called Lilium that can be used to do everything from powering lighting systems to bringing back the dead. The Arcanics, meanwhile, brutally murder any humans who enter their lands, even by accident, and oppress their own lower classes.

Enter the protagonist, an Arcanic teen named Maika Halfwolf. The only daughter of the formidable Moriko Halfwolf — known, respected and feared by both the Cumaea and the Arcanics — Maika grew up a starving, degraded slave in human territory. Eventually Maika escaped, maturing into a strong, badass young woman driven by rage at the humans who enslaved her, the Arcanics who abandoned her... pretty much everyone, really.

Maika also possesses a deadly secret: Living in her body, underneath her skin, is a Monstrum.

Known as the "Old Gods", Monstra are Exactly What It Says on the Tin: terrible monsters, older than even the Ancients, long ago banished to the outer universe by the goddess Ubasti and her children, the sapient, wise but usually eccentric and poetry-crazed cats. Now though, one is living inside her... and it is hungry.

Joining Maika as she searches for answers about her dead mother and her secrets, as well as the ancient Starfish Alien god inside her body, is an eclectic and often strange Ragtag Band of Misfits. There's Kippa, a young fox girl who is still very much a child despite having definitely seen some horrors in her life; Master Ren, The Philosopher Eccentric Mentor cat with two tails, questionable motives, and impossible knowledge; and a few extras who either help or hinder but are lucky to survive in either case.

A lot of powerful forces are trying to use Maika as a tool for their own goals, including Arcanic political factions, the Cumaea, the Monstra within her, and more.

But Maika has no wish to be anyone's pawn.

A Spin-Off series bridging the gap between the fifth and sixth arcs called Monstress: Talk-Stories was published late 2020.