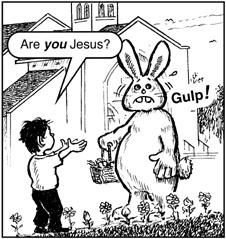 Brian: Look, you've got it all wrong! You don't need to follow me, you don't need to follow anybody! You've got to think for yourselves! You're all individuals!
The Crowd: [in unison] Yes! We're all individuals!
Brian: You're all different!
The Crowd: [in unison] Yes, we are all different!
Man in Crowd: I'm not.
Another Man: Shhh!
— Monty Python's Life of Brian
Advertisement:

Bob is neither a true messiah nor a scam artist wanting to make his own religion. He's just a regular good guy. And yet he is made into an object of misplaced religious faith. For added irony, this religion is likely to be one he finds repulsive—or would find repulsive, in the cases where he's not even aware of having followers. Of course, if the character is of a decent sort, he will try to clear up the misunderstanding, but that might take some persuading to do so.

If this worship keeps growing out of control, it can establish itself as a Scam Religion. This can either be used to suggest that Religion Is Wrong, or it can be an illustration of the foolishness of "worshipping false idols".

Compare and Contrast Stop Worshipping Me, where the guy not wanting to be worshiped actually is a god or messiah or similar: The faith is not truly false, but the deity doesn't want the worship anyway. Also contrast God Guise, which has the character being falsely worshipped use said worship to his advantage. See also A God, I Am Not, when a powerful being rejects the label of god. Also contrast I'm Not a Hero, I'm...: Cases of misplaced hero worship (rather then religious worship) goes into that trope.

Brian himself is desperately trying to convince everyone that he isn't the messiah, but the crowd of followers aren't having it, asking for miracles and signs.

Alternative Title(s): Stop Worshipping Me I Am Just A Regular Guy

Brian himself is desperately trying to convince everyone that he isn't the messiah, but the crowd of followers aren't having it, asking for miracles and signs.