Recap / Star Trek: The Next Generation S3E4 "Who Watches the Watchers" 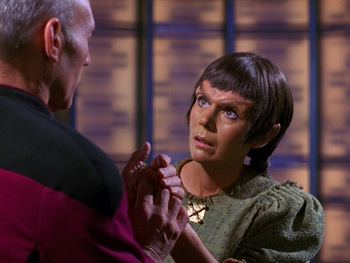 Nuria, a Mintakan, gazes in awe at "The Picard."
Advertisement:

The Federation has set up a secret observation station on a primitive Vulcan-like planet named Mintaka III to observe the inhabitants without their knowledge. The Enterprise is delivering supplies when its reactor breaks down, and it becomes briefly visible to the outside world. Two of the Mintakans see it within that window of time, and one of them, Liko (Ray Wise), is injured while trying to investigate. Doctor Crusher decides to beam him up to the Enterprise to tend to his injuries. Picard is unhappy with her decision, but allows it on the condition that she erase his memories afterwards, as Doctor Pulaski did to Sargenka in "Pen Pals." Crusher warns him that the operation might not be successful, but agrees.

Liko awakens and sees Picard standing over him in Sickbay, being treated like a boss by everyone around him, and comes to the conclusion that Picard is some kind of god that raised him from the dead. Unaware that Crusher's memory wipe didn’t take, they send him back to where they found him and assume that the problem's solved. But they still have another problem: One of the workers from the station, Palmer, is missing, and the sensors can't pick him up. To find him, Riker and Troi beam down disguised as Mintakans.

The first thing they see is Liko recounting his tale of the mighty Picard to his friends and neighbors. The others are skeptical, especially a woman known as Nuria, but when the villagers find the unconscious Palmer, who is clearly not of their world, even she is convinced. Riker warns Picard that their interference is quickly becoming a new religion, and Picard tells them to get Palmer out of there immediately. Troi creates a distraction while Riker grabs Palmer and beams away, but the Mintakans see him before he escapes and capture Troi as his accomplice. Liko immediately says Troi should be punished to appease the Picard. Nuria says they have no reason to hurt anyone just yet, but they might if they can’t find Palmer.

The leader of the research station tells Picard that, with the damage to the Prime Directive already done, the only way to minimize the chaos is to appear before the Mintakans as a god and give them guidelines for their new religion to follow. Picard refuses to push the Mintakans back into a belief in superstition and the supernatural. Instead, he selects Nuria as a voice of reason and beams her onto the ship to show her that he is simply a man with advanced technology rather than a god. Nuria comes to understand Picard's message but is still in awe over his technological powers. She begs him to raise several of her recently deceased villagers from the dead. Picard allows her to watch a patient die in Sickbay to show her that he and his kind are just as mortal as she is.

Nuria and Picard return to the village just in time to prevent Liko from killing Troi as a sacrifice. Liko requires some more convincing, however, and attempts to prove that Picard is immortal by aiming a bow at him. Though the others try to stop Liko, Picard prepares to sacrifice his life to convince the Mintakans of his mortality. Liko's daughter throws off his aim, and he hits Picard in the shoulder. The sight of red blood convinces Liko, and of course thanks to Dr. Crusher, the injury is merely an annoyance to Picard.

The Enterprise crew dismantles the observation station as Picard explains to the Mintakens what happened. He tells them that it's forbidden for him to teach them anything that would interfere with their natural development, but they thank him for showing them what they might achieve in time. Picard promises them that he will never forget them.