Recap / Star Trek: The Next Generation S3E3 "The Survivors" 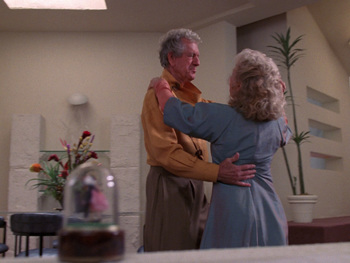 Don't be fooled by the cute old couple; this episode is really horrifying.
Advertisement:

The Enterprise responds to a distress call from a Federation colony in the Delta Rana system. Upon their arrival, however, they find the planet Rana IV completely leveled except for one house on a small, green parcel of land. Troi has a hard time detecting any inhabitants on the planet, but eventually identifies two survivors.

Commander Riker leads an away team to investigate. The home is just as it appears from space, a small parcel of green among barren wasteland. The two survivors are Kevin and Rishon Uxbridge. Kevin is standoffish and tries to threaten the team with a nonfunctioning phaser, while the kindly Rishon is welcomes everyone inside for tea. The couple relate how an alien ship attacked the colony, but they did not go to fight. They both claim to have no idea why they were left alone, but both are adamant about remaining on the empty planet. Before the away team leaves, Rishon shows an old music box to Data.

Back on the ship, Counselor Troi has been trying to learn more about the survivors. Suddenly she starts hearing the music box's music in her head, which quickly begins to disturb her. As Riker gives his report on the Uxbridges, she retreats her to her quarters. Soon after, the ship is attacked by a mysterious, giant vessel, fitting the description of the ship Kevin described as attacking the colony. Its weapons are unable to penetrate the Enterprise's shields, and it retreats from the system. The Enterprise gives chase, only to find that any increase in speed is simultaneously matched by the escaping intruder. Believing he's being played with, Picard orders the ship back to Rana IV.

Picard pays a personal visit to the Uxbridges on the pretense of giving them a matter replicator. As usual, Kevin is unhappy to be bothered, but Rishon is friendly and accommodating. Picard grills them for more information about their circumstances. Kevin reveals that he is a man of a particular conscience: he refuses to fight for absolutely any reason, and his wife stayed with him as the other colonists fought the invaders. Kevin points out that the invaders had no way of knowing that, though, leaving Picard as confused as before. He again urges the Uxbridges to join him on the Enterprise, but Kevin refuses, and Richon opts to stay with him.

Back on the ship, Troi's condition worsens, eventually reducing her to panicked, screaming insanity and Dr. Crusher is forced to place her in a deep, medically-induced coma. Just as Picard returns, the alien ship attacks again, this time disabling their shields while resisting their phaser and photon torpedo attacks, forcing the Enterprise to retreat.

When the ship returns to Rana IV again, there is no sign of the attacker. Picard decides to beam down again, walking in as Kevin and Rishon are dancing, as if to celebrate the Enterprise's departure. Picard makes one last plea to Rishon, who refuses to leave, and then declares that the Enterprise will not leave orbit so long as the Uxbridges remain on the planet. This time, when Picard returns to the bridge, the attacker again appears out of nowhere, but he orders the crew not to interfere. The enemy ship moves to low orbit, where it proceeds to destroy the Uxbridge house. Picard orders a single photon torpedo fired, which destroys the ship. With no reason remaining to stay, Picard nevertheless orders the ship to a higher orbit, and to continue to monitor the planet.

The crew is pretty astounded by Picard's odd actions, but his hunch pays off a few hours later as the house reappears. No longer willing to entertain the charade, Picard orders the Uxbridges beamed directly to the bridge, where he reveals what he's figured out: Rishon had, in fact, died in the attack, and that Kevin had somehow not only recreated her, but the attacking ship as well. Rishon disappears, and Kevin becomes a being of light before disappearing to another part of the ship—Troi's quarters, where he reappears in human form and removes the music from her mind. He'd put it there out of fear of Troi discovering his true identity, but now that it's out, he opens up to Picard.

Kevin identifies himself as a Douwd, an immortal of extraordinary power who has worn numerous forms over the millennia. When he became human, though, he fell in love with Rishon, and put aside his powers to grow old with her. Rishon had gone to fight with the colonists against the Husnock, "a species of hideous intelligence," and died never knowing Kevin wasn't even human. Despite having the power to repel the Husnock, Kevin refused to kill, only to watch his wife die. In his ensuing grief, he snapped, and used his power to wipe out the Husnock, everywhere. In shame for his genocide, he has remained on the dead planet in self-imposed exile with an imitation of the wife he lost.

Realizing the Federation is in no position to judge an entity of such great power, and whose crime exceeds any law they have, Picard agrees to leave Kevin on Rana IV in his self-imposed exile. As the ship departs, Picard summarizes, "We leave behind a being of extraordinary power and conscience. I'm not certain if he should be praised or condemned, only that he should be left alone."