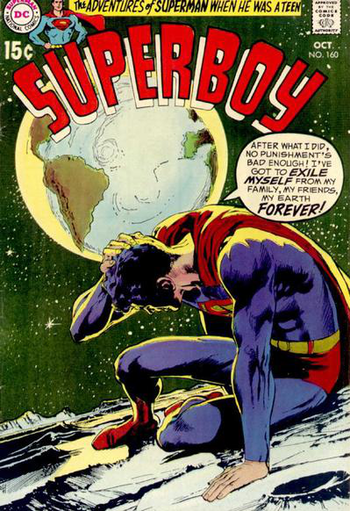 "He was training a new generation of Jedi. There was nobody else left to do it, so he took the burden on himself. Everything was going great, until... one boy, an apprentice, turned against him and destroyed it all. Luke felt responsible. He just...walked away from everything."
— Han Solo, The Force Awakens
Advertisement:

So you did something bad. It could be intentional, accidental, or against your will. Whatever you did, the act was so bad that there's nothing you can do to make up for what you've done, and a severe punishment is in order. Now that society hates you and the law is after you, you are left with two choices — either face society's contempt and accept your punishment or exile yourself from society.

This is the self-imposed version of The Exile where instead of society exiling the character, the character exiles themselves from it. For one reason, the character departing themselves from society will realize that because of the gravity of what they've done, society has no place for them. Another reason for their self-exile is because they may want to avoid receiving punishment from the law enforcement. Either way, the self-exiled character will need all the luck in finding useful resources to survive outside of society, and if they aren't lucky, the law enforcement will manage to catch up with them and arrest them.

Compare No Place for Me There when a character exiles himself because of his well-meaning, but questionable deeds to accomplish a better world. Also related to You Can't Go Home Again and Starting a New Life.