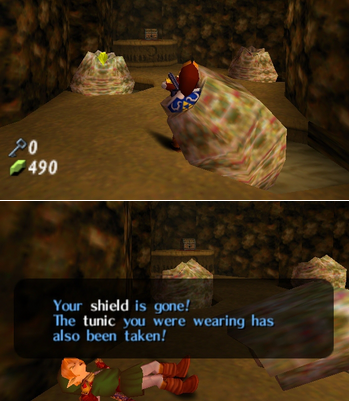 "It eats whatever you're carrying. You'd better defeat it if you want your stuff back."
— Tatl's Note on Like-Likes, The Legend of Zelda: Majora's Mask
Advertisement:

An enemy in a game that dines on equipment or items that the player character needs. If it gets its mouth or whichever form of digestive organ it possesses around you, you might suffer damage but a weapon/item/tool/piece of armor that you have is the real meal.

Or they might even find items lying on the ground. As long as you are going to need it, they are going to try to eat it.

Now even though the item eaten can vary, it's almost never something that would make the game Unwinnable, or even render the item unobtainable again, just something that makes you really hate this enemy.

Sometimes you have the chance to get the item back, often by killing this enemy quickly. Other times it's just lost and you have to get another copy of the item.

A Sister Trope to Bandit Mook.

Compare Video Game Stealing, Ninja Looting, No Item Use for You. Contrast Feed It a Bomb and So Long, and Thanks for All the Gear.