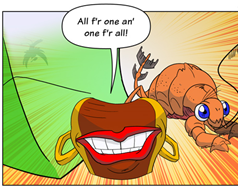 There's always room for jello. Even in Angels Pose.
"Monsters are cool when you're one of them. Rar!"
— Abbie, Weregeek
Advertisement:

Life is tough for a wandering monster. Not only do you have to live in a dungeon with no new energy entering the ecosystem, but you're in constant danger of being killed by treasure hunters or perhaps other monsters. Can't be a fun existence.

But wait! The adventurers are in an environment just as dangerous, and they live a lot longer! They get all those nifty healing potions and shiny swords and glamorous quests! Their goodness feels good! People respect them... well, usually! They're at the top of the world! Well, to the thinking monster, a course of action suggests itself...

This trope is not for Mons, Pet Monstrosities, or Monster Allies. This is when a lone adventurer, an entire party, or at the very least a core party member are of a 'monsternote "Monster" here meaning "normally Always Chaotic Evil in this Verse".' species. By definition either a Reluctant Monster or a Defector from Decadence, a Monster Adventurer might also be a Horrifying Hero depending on how monstrous they are. The civilian version is a Friendly Neighborhood Vampire.

Note that this trope only applies when there's an Always Chaotic Evil (or Always Neutral Hungry) morality for the Monster Adventurers to break free from, otherwise they're just normal adventurers of an unusual species. The Monster Adventurer's natural habitat is the RPG Mechanics 'Verse, though they're also frequently found in settings with Loads and Loads of Races. See also Breakout Mook Character, My Species Doth Protest Too Much, Perspective Flip and Player Character.