Night of the Living Mooks 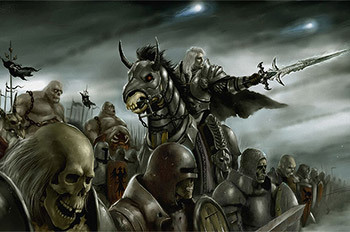 The undead don't kill. They recruit.
"The undead require very little maintenance and rarely demand a salary or benefits. What they lack in speed and agility they more than make up for in persistence and can-do attitude. You won't hear any sass or whining from the undead! Since the victims themselves are transformed into walking undead, these henchmen are a smart investment that will grow your organization even when you are busy with other tasks."
— Neil Zawacki, "How to Be a Villain"
Advertisement:

Undead mooks are the entire point of the Zombie Apocalypse. May be zombies, skeletons, or even mummies. An extreme form of Faceless Goons, in that while it's pretty hard to identify with someone with no face, it's basically impossible to sympathize with a corpse.note Well, a mindless corpse at least. Free-willed undead, while they can be evil, can also be good, in which case they come off as mostly tragic, if a bit creepy.

May be spawned from Clown Car Graveyards, which act as Mook Makers. They may need to be killed in a certain way, or may even be completely unkillable, getting back up every time. If there's a Necromancer involved, defeating them may bring down this Keystone Army.

Sometimes the officer class will be made up of more strong-willed, sentient types of undead, such as vampires or wights. May be the official army of The Necrocracy.

If you really want to find these guys, look in the designated Big Boo's Haunt, or any other Unholy Ground. Animate Dead and Raising the Steaks might be ways to get troops for this. Compare/contrast Undead Laborers, who are used for constructive work rather than fighting, and Cavalry of the Dead, when the heroes' fallen allies rise to aid them as The Cavalry. Undead mooks are a staple of video games, Tabletop Games, and live-action alike. Being undead, the villain doesn't suffer Mook Depletion with these guys. Because they sometimes carry diseases that are fatal if left unchecked, they partially overlap with Instakill Mook. Compare Everything's Deader with Zombies.

Kary resurrects the army previously slaughtered by Omega and Xero.

Kary resurrects the army previously slaughtered by Omega and Xero.