The war that even wizards dread begins... 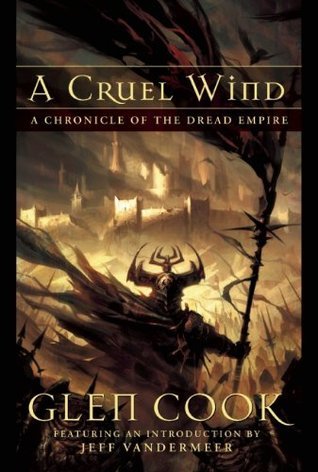 The Dread Empire is a dark epic fantasy series by Glen Cook. Though its earliest volumes predate Cook's more famous Black Company series by several years, the two share a number of similarities in themes and tone, offering a soldier's-eye view of a gritty, morally grey world in the throes of conflict driven by larger-than-life sorcerers and immortals. However, Dread Empire is told in third-person rather than Black Company's first person, offering a wider scope with a broader range of perspectives, and though still distinctly gritty it represents a somewhat more traditional take on the genre.

The series begins with the Storm Kings of Ravenkrak, a group of brothers and minor sorcerers who dream of raising an empire for themselves. But as it turns out, they're only bit players in a much larger web. The immortal sorcerer Varthlokkur, who destroyed the once-great empire of Ilkazar centuries ago, believes that the Storm Kings' sister Nepanthe is his prophesied bride and hires a Ragtag Bunch of Misfits to retrieve her for him - only for one of them, the con-man Mocker, to fall for her himself. The leader of said mercenaries, Bragi Ragnarson, is an old companion of Haroun bin-Yousif, the King Without a Throne, whose rivalry with the conquering prophet El Murid is the stuff of legends. And in the east lies Shinsan, the titular Dread Empire, a magocracy where Varthlokkur learned his art centuries ago and whose leaders have far-reaching plans of their own.

Oh, and as events unfold it becomes increasingly evident that someone, perhaps the legendary Star Rider himself, is playing everyone against everyone for some unfathomable goal...

The series is broadly divided into three arcs, each collected as an omnibus, plus one short story collection.

Has nothing to do with Dread Empire's Fall, a science fiction series by Walter Jon Williams.