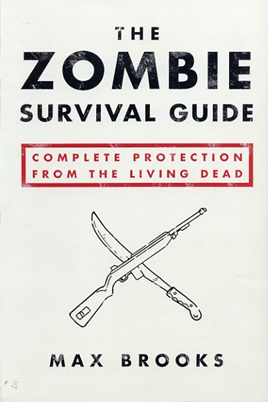 The Zombie Survival Guide is a book written by Max Brooks.

The title is pretty much self-explanatory. The book gives a detailed account on how to survive zombie outbreaks (all four levels). Written in a Deadpan Snarker tone, it is a comical look at what the average person would have to do to survive the Zombie Apocalypse, complete with a guide to arranging suitable food and weapon stores. Additionally, it explains how, if possible, to acquire a remote plot of land, and details describing how to turn it into a place to live for around twenty years, or until the zombies have decomposed.

It also provides information as to what a zombie is, common myths, how to spot a zombie outbreak (the government is covering it up) and historical examples of zombies and how everything turned out.

Followed up three years later by World War Z in which characters make occasional reference to it, usually saying how it wasn't very good.