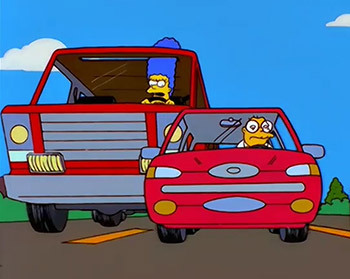 A gigantic sport-utility vehicle, built under the philosophy that Bigger Is Better.

Named for the Hummer brand, itself a derivative of the Humvee military vehicle, a Hummer Dinger is massive, boxy, unattractive, and incredibly fuel-inefficient. It makes other cars tremble in its wake, either from fear or from being so heavy it shakes the road. It'll have a bold, authoritative, powerful name, often invoking travel and rugged wilderness — odds are good it's named after a famous mountain somewhere. It's filled with all sorts of equipment for all sorts of jobs, from climbing mountains to towing trailers, and it's equipped for rain, snow, sleet, hail, mud, and whatever else Mother Nature can throw at it.

And yet it will almost never be used in these conditions. This is because the driver of your typical Hummer Dinger falls into one of these categories:

It's important that a Hummer Dinger not actually be used for difficult driving conditions. This is not an SUV that actually sees use in tough terrain or weather. This is a suburban status symbol, whose driver is almost always Compensating for Something. As such, those drivers are usually Acceptable Targets; they're seen as having wasted their money trying to look cool and manly. There's often also a Green Aesop thrown in there, as Hummer Dingers are notorious gas guzzlers.

This is considered an American trope; most other countries don't have such pervasive suburbs. Where population density is higher and streets are narrower (especially someplace like Japan or Europe), a Hummer Dinger would be seen as obscenely impractical. But there are equivalents in other places, like the British "Chelsea Tractor" (usually a Range Rover or alternatively, in recent years, a Mercedes-Benz G-Wagon), the Australian "Toorak Tractor" (named after a wealthy Melbourne suburb), and the Brazilian "luxury pickup", which is actually a pickup truck but achieves the same effect down there.

It's also largely a Discredited Trope. The Hummer was a Briefer Than They Think phenomenon of the mid-2000s; by the late 2000s and early 2010s, twin energy and economic crises led to such big cars falling out in favor of more energy efficient cars, particularly once hybrids and electric cars became a thing. The Hummer brand ended up as a casualty of the Great Recession, meeting its temporary demise in 2009, and when General Motors rebooted it in 2020 they made it electric. There's a whole analysis page on the phenomenon.

See also Rice Burner (smaller cars with useless enhancements) and Absurdly-Long Limousine, both of which reflect equally poorly on the owner. If you combine any of them with a Hummer Dinger, well, God help you.note Do an internet search for "Stretch Hummer Limo". Just do it.