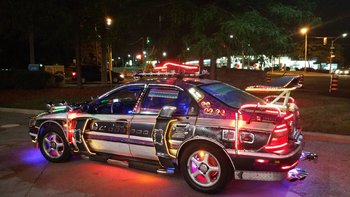 We have subwoofers the likes of which even God has never seen.
Advertisement:

Any car that's weighed down with several tons of aftermarket crap/improvements. Done well this can result in a Cool Car, especially if the car becomes really quick, or impossibly durable, or loaded with gadgets that actually do something useful - hydraulics may be cool on a Low-Rider, but you can't exactly fight crime with them. Unfortunately, where previously the misguided customizer could only fit an 8-Track and an imitation gold steering wheel, the onward march of technology also means an ever increasing amount of pointless electronic window-dressing can be fitted into a car, resulting in a Rice Burner.

Some of the improvements can even be mundane, like Cup Holders.

Not to be confused with a hot rod, which involves taking stuff out of a car and then stuffing a very big engine in.

A Super-Trope to Itasha (otaku related pimping the car). May relate to Absurdly Long Limousine.

This trope is Truth in Television, as everyone has at least a chance to see a modified car of this type, either a Shelby Mustang or a Hennessey Venom GT. So, No Real Life Examples, Please!