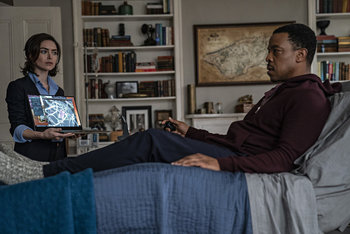 Even paraplegia can't keep him from solving crimes.
Lassiter: Well, pardon me if I'm just a little skeptical. Believable, as it is, that you solved all these crimes... I'm sorry, what was it? Watching the local Channel 8 News reports.
Shawn: I confess. That's not true. Sometimes I watch Channel 5. I prefer Channel 8. The weather girl? Adorable.
— Psych, "Pilot"
Advertisement:

You have an Amateur Sleuth or an exotic detective. And to prove just how smart he is, not only can he solve any case just by scanning the crime scene, he can also solve crimes without ever having to visit the scene. The Phone-In Detective is the detective who is able to do some of his sleuthing over the phone due to being away for some reason. Full time Phone-In Detectives are rare, often the detectives will only have to phone in very few of their cases their whole life and will only do so for special cases. It is not completely necessary for any phones to be involved, however, the detective might get the information from telegrams, newspapers, e-mail, or regular reports from The Watson or the police.

Will sometimes be the only interaction the lead has in a Lower-Deck Episode.

Not to be confused with detectives who are "phoning it in," i.e. doing an incredibly lazy half-assed job.