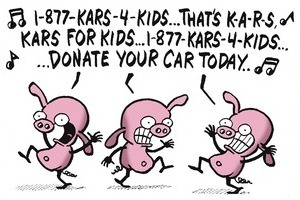 A common advertising jingle, usually among local businesses, in which the phone number of the service is sung. This makes it much easier to remember than if it were simply spoken. These jingles tend to be quite catchy.

This may also be combined with a Spelling Song. Sub-trope to Telephone Song.