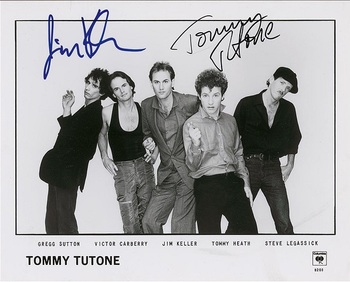 "Jenny I've got your number/I need to make you mine/Jenny don't change your number..."
Advertisement:

Tommy Tutone is a California pop band best known for their 1981 song "867-5309/Jenny". The band was formed by Tommy Heath and Jim Keller in the late 1970s, and they released three albums in the early 1980s. The band released two more albums in The '90s, and their latest single was released in 2017.

Upon finding Jenny's number on the wall, a man consults with a psychiatrist.

Upon finding Jenny's number on the wall, a man consults with a psychiatrist.