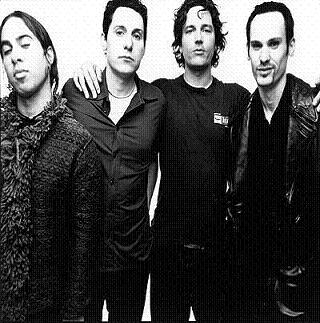 Third Eye Blind is an Alternative Rock band that emerged during the late 1990s (though, as the article says, "Alternative Rock" certainly wasn't the "alternative" at the time). Their story begins with the release of their Self-Titled Album in 1997. The band catapulted to fame on the back of the album's three big-hit singles: "Semi-Charmed Life", a wildly upbeat and catchy song about a man suffering from a crystal meth addiction, the powerful anti-suicide ballad "Jumper", and "How's It Going To Be", about a breakup and the subsequent fallout.

Not content with being a one-album band, Third Eye Blind followed up their success with Blue in 1999. While the darker and more experimental Blue sold quite a few copies, its success couldn't be compared to their first album's, with only "Never Let You Go" being a Top 40 hit, and it was met with a far colder reception from critics. What's worse, soon after the album was released, guitarist Kevin Cadogan (who co-wrote most of the songs with singer Stephan Jenkins) was suddenly fired, replaced, and allegedly denied royalties for the work he helped create. Cadogan sued, of course, and the debacle ended with a settlement in 2002. Nevertheless, the band continued.

In 2003, they released Out of the Vein. While one might be inclined to think that this album was all about drugs (given that the band was famous for "Semi-Charmed Life"), this self-described New Sound Album mostly contained one Break-Up Song after another that dealt with the end of Jenkins' relationship with Charlize Theron. Partly because their record label was being purchased by a bigger record label at the time, Out of the Vein sold less than half the number of copies that Blue did.

The band then went five years without releasing any new material (a Greatest Hits Album was released in the interim). In 2008, they finally released the politically charged Red Star EP, consisting of three of the songs off of their next album. The EP's mild success was a sign of things to come for the band, as their next album, Ursa Major, was a miniature comeback for them. Sadly, after Ursa Major was released, Tony Fredianelli, the guitarist who replaced Cadogan, left and sued the band for denying him credit and royalties that were owed to him. Needless to say, as two of its former guitarists sued the band for similar reasons, many feel that Jenkins (who gets most of the credit for writing the songs) might be something of a Small Name, Big Ego.