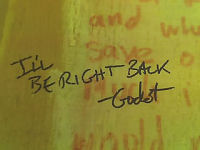 "I read the graffiti in the bathroom stall
Like the holy scriptures of the shopping mall."
— Green Day, "Jesus of Suburbia"
Advertisement:

For whatever reason, some people seem compelled to scrawl or carve all manner of interesting things onto the walls of public restrooms (whether they do this with the bathroom in their own home is anyone's guess). Usually, it's phone numbers or crude insinuations about characters (often the very character who's reading it). Occasionally you'll find poetry, pithy sayings (which, appropriately, can be filled with Vulgar and Toilet Humor), colorful drawings, or Arc Words. Often includes some variation on "For a good time call [phone number]." Hate speech and frowned-upon iconography are also possibilities if you're unlucky enough.

Occasionally, the trope turns up in Police Procedural shows, as when victims of a campus date rapist have been afraid to report the crime, so they write warnings to other potential victims all over the ladies' room stalls.

Let's just say this is Truth in Television for more than half of us and leave it at that. Commonly found in a Disgusting Public Toilet.

Archaeology has proven this trope to be Older Than Feudalism: see the Real Life examples. For the general "X was Here" type of graffiti, see Kilroy Was Here.