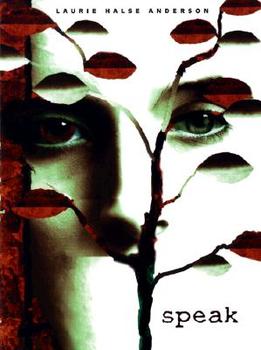 "It is my first morning of high school. I have seven new notebooks, a skirt I hate, and a stomachache."
Advertisement:

Speak is a contemporary young adult novel by Laurie Halse Anderson published in 1999. The book has both won awards and been the target of vocal Moral Guardians over the years due to its subject matter.

The book centers around a teenager named Melinda Sordino, who's just entered the ninth grade. She's not exactly the most popular kid in school, due almost entirely to her calling the police at a party last summer.

After the events of said party, Melinda goes from a bright, outgoing, friendly teenager to a bitter, angry, depressed one. Her grades decline, her parents are alarmed, and Melinda can't find the words to tell anyone what really happened; eventually, she stops speaking almost entirely. The plot mostly centers around Melinda's gradual decline, up until The Reveal of what happened at the party, and then focuses on her gradual climb out of the hole.

A sort-of sequel that takes place in the same high school, Catalyst, was released in 2002.

The Film of the Book was released in 2004, starring a pre-Twilight Kristen Stewart in the lead role.

A graphic novel adaptation was released in 2018, with art by Emily Carroll.