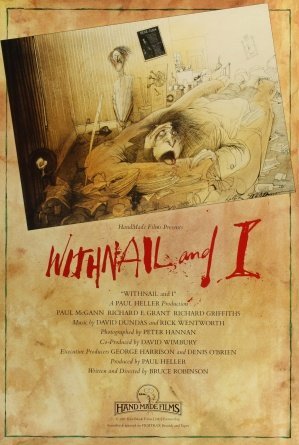 "We've gone on holiday by mistake!"
Withnail: [after drinking an ounce of lighter fluid] Have we got any more?
[Marwood shakes his head]
Withnail: Liar. What's in your toolbox?
Marwood: No, we have nothing. Sit down.
Withnail: Liar! You've got anti-freeze!
Marwood: Bloody fool! You should never mix your drinks!
[Withnail pauses, laughs hysterically, then falls over and vomits on Marwood's boots]
—The title characters pretty much set the tone for the whole movie
Advertisement:

Made in 1987, Withnail & I is a semi-autobiographical classic black comedy set in the end weeks of 1969. It's written and directed by Bruce Robinson, who lived it. The film stars Richard E. Grant as Withnail, a messed-up, flamboyant alcoholic, and Paul McGann as Marwood (or "I", since he's never named in the actual film), his slightly more gentle and sensible friend. Both are perpetually unemployed (and in Withnail's case, almost entirely unemployable) actors living in squalor, who decide to get away from it all with a holiday in the countryside. They do so by way of borrowing a cottage belonging to Withnail's — equally flamboyant — gay Uncle Monty.

Trouble is, everything goes wrong; they're totally incapable of looking after themselves, rendering the — in itself rather cosy — cottage a cold, dark, borderline inhospitable shack. They can't find any food, they throw their money away on booze, it won't stop pouring, the locals are surly and unwelcoming, a local poacher takes exception to Withnail and promises violent retribution. And as if that wasn't enough, Uncle Monty makes a surprise appearance, with amorous intentions towards Marwood.

The film is famous for its hilarious lines, as well as for having one of the saddest endings in comedy film history. It's gained cult status (besides an evergreen popularity among university students, often people who see it will quote it whole) and is considered an important part of British film culture. Equally (in)famous are Robinson's mistreatment by Handmade Films during production, and the film's intense amounts of Ho Yay and Paul McGann Fanservice.

The script is also notable as being a work of art just as much as the film is, and Robinson's descriptions outside of the dialogue have to be seen to be believed.

I have of late - but wherefore I know not - lost all my mirth, forgone all custom of exercises; and indeed it goes so heavily with my disposition that this goodly frame, the earth, seems to me a sterile promontory; this most excellent canopy, the air, look you, this brave o'erhanging firmament, this majestical roof fretted with golden fire, why, it appears no other thing to me than a foul and pestilential congregation of vapours. What a piece of work is a man! how noble in reason! how infinite in faculty! in form and moving how express and admirable! in action how like an angel! in apprehension how like a god! the beauty of the world! the paragon of animals! And yet to me, what is this quintessence of dust? man delights not me: no, nor woman neither.