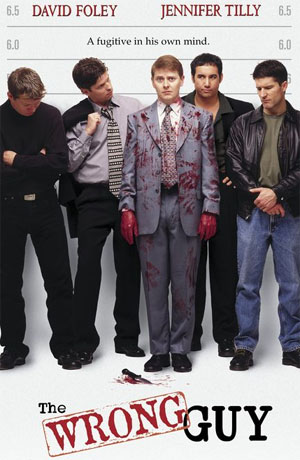 Nelson Hibbert (Foley) is a slightly obnoxious executive who will do anything he can to get to the top, and is convinced that his boss (Kenneth Welsh) is about to announce him as the new president of the company. When his boss instead gives this position to his hated rival, Nelson doesn't take it very well, and ends up yelling death threats at his boss while being dragged away by security. To make matters worse, a few minutes later Nelson's boss is murdered, and Nelson is the first one to discover the body. Panicking and paranoid, Nelson is convinced that the police will conclude he is the murderer (not least because of the many ways he accidentally implicates himself) and decides to go on the run... unaware that the police already know who the real murderer is, and aren't interested in Nelson in the slightest. Hilarity Ensues as Nelson frequently crosses paths with both the cops and the real killer at the worst times possible.

Unfortunately, the film only received a theatrical release in Canada, and it was only released direct-to-video in the U.S.