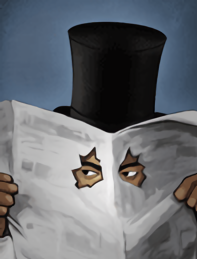 "News just in: I'm watching your every move."
"Now you need never be concerned about destroying your own copy. You can have your paper-with-eye-holes and read it."
— A Subscription to the Gazette and a Whetted Pair of Scissors, Fallen London
Advertisement:

Alice enters the crowded cafe, looking all about her to make sure that she's not being tailed by Bob. Good... seems like she's finally safe. The only people on the premises are an elderly woman, a bunch of businessmen she doesn't recognize, and some fellow whose face she can't see because it's hidden behind the newspaper he's reading. Thank God she's safe.

Alice sits down, assured of her safety. The man lowers his newspaper — Gasp!! It was Bob all along, cleverly using the newspaper to hide his face!

This is a trope for when someone attempts to hide by covering their face with a newspaper, magazine, book or other printed work. Often combined with a musical sting when the paper is lowered to let the audience know that this man is a villain. This has a surprisingly high rate of success. This is mostly a Dead Horse Trope and, as such, is very often parodied. Two of the most common types of parody are having the character's face on the cover or front page of whatever he's reading, or else having eye holes cut out of the paper.