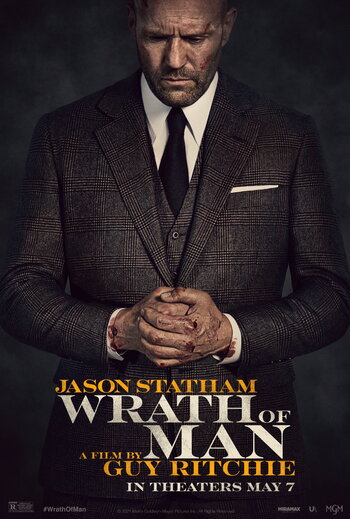 "He's a dark fucking spirit."
Boy Sweat Dave: Do you have any idea how dangerous this job can be?
Patrick "H" Hill: Some idea, yeah.
Advertisement:

Wrath of Man is a crime thriller film directed by Guy Ritchie, based on the 2004 French film Cash Truck, and starring Jason Statham, Jeffrey Donovan, Josh Hartnett, and Holt McCallany.

Patrick "H" Hill (Statham) is a new employee at Fortico Security, an armored truck service that transfers millions of dollars a month and is prime prey for professional criminals. Under the tutelage of "Bullet" (McCallany), H seems to be just another recruit, until he masterfully wipes out an entire team of skilled robbers who hit a Fortico truck.

With ruthless efficiency and cold determination, the mysterious H continues to terrorize any potential criminals who target Fortico, intent on righting a wrong from his past for his own dark purposes... no matter what it takes.

Standing out as a particularly dark entry in Guy Ritchie's filmography, the film was released internationally on April 22, 2021, and in the United States on May 7.

Wrath of Man contains examples of:

♫ I hear the train a comin', it's rolling round the bend
And I ain't seen the sunshine since I don't know when
I'm stuck in Folsom prison, and time keeps draggin' on
But that train keeps a rollin' on down to San Antone. ♫