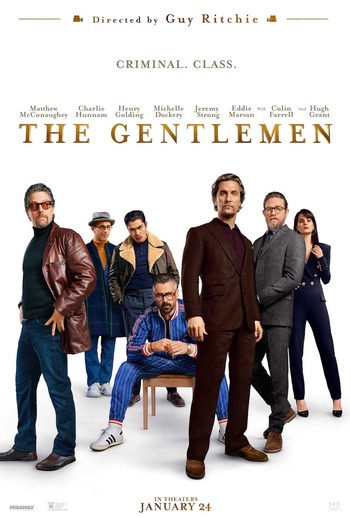 "If you smell smoke, it’s because there’s a fire. So you’re going to have to stamp that out quickly."
"The plot begins to thicken. Now, I can’t be specific about the heroes and zeros, but our protagonist is a hungry animal. There is a lot of money hanging in the balance. Our antagonist explodes on the scene, like a millennial firework. And he’s indirectly started a war."
— Fletcher
Advertisement:

Raymond Smith (Hunnam) is a wealthy suburbanite living a life of quiet luxury. He also happens to be The Consigliere to American expat-turned-drug lord Mickey Pearson (McConaughey), whose highly profitable marijuana empire comes under threat when word comes out he's looking to leave the business. Ray has been working to watch Mickey's back and ensure his retirement comes without incident — but that all changes when a sleazy private detective named Fletcher (Grant) suddenly shows up at his house one night with an elaborate tale to spin, and an offer he can't refuse...

It is said to be Ritchie's return to the style of his earlier films Lock, Stock & Two Smoking Barrels and Snatch.. It was released by STX Entertainment on January 24, 2020.

The Gentlemen contains examples of:

"There’s only one rule in this jungle! When the lion is hungry, he eats."