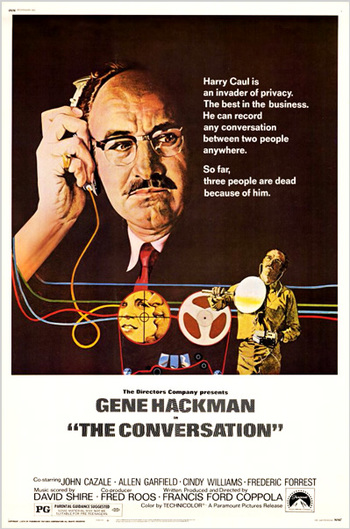 Harry Caul (Hackman) is a paranoid, socially-withdrawn surveillance expert in San Francisco who runs a personal business in which he spies on people's conversations at the behest of his clients and reports the information back to them. He is strictly professional in his activities, never questioning why his clients want those he surveys spied on, nor intervening accordingly. However, his latest assignment has been to spy on Ann (Williams), the wife of the director of a big company, and her lover Mark (Forrest). He hears in their recorded conversations the phrase: "He'd kill us if he got the chance." He thus theorizes that Ann's husband suspects she is having an affair and is planning to murder her and Mark, and thereby is torn over whether to adhere to his non-intervention rule or do something.

As it turns out, the theory he has regarding Ann, Mark and the director is dreadfully wrong.

The film is often mistakenly regarded as a reaction to the then-current Watergate scandal. In reality, the resemblance was just a prophetic coincidence; the screenplay and filming were completed prior to the scandal hitting the press. Furthermore, Coppola explained in the DVD commentary that he was inspired by the earlier film Blowup, which dealt with a similar premise, but with photography.