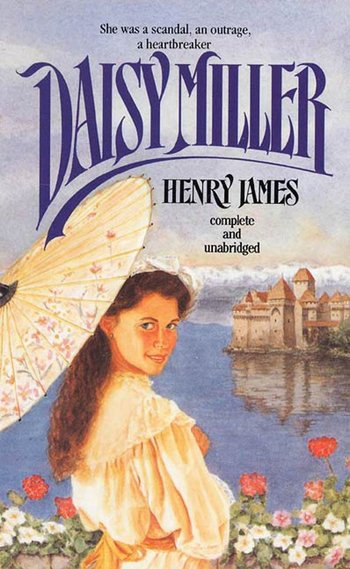 Winterbourne: What has she been doing?
Mrs. Walker: Everything that is not done here.
Advertisement:

An 1878 novella by Henry James — half romantic comedy, half social commentary and mockery of rich, snobby Americans who tried to imitate rich, snobby Europeans. Available here

Frederick Winterbourne, age 27, was just another average, mundane, young man, American by birth but raised in Europe since childhood, until he took a break from "studying" in Geneva to visit his aunt in Vevey, Switzerland. That's when he met her: 19-year-old Daisy Miller from Schenectady, New York, on a tour of Europe with her mother and little brother. From the moment she stumbles across his path as he's sitting in the hotel garden drinking coffee, Winterbourne is smitten by her. She's beautiful, graceful, friendly... and, he soons learns, the enemy of all respectable American snobs trying to fit in among European snobs. Her crimes are unforgiveable. She's a chatterbox! She treats her courier, Eugenio, like he's her friend and equal! She takes strolls in public alone or worse, with men she's not related to! She... flirts! In short, she's an independent, stubborn, lively young woman who's interested in everything, wants to be friends with everybody, and literally refuses to do as the Romans do when in Rome. No amount of mortification or warnings from her compatriots can convince her to live life by anything but her own rules and what makes her happy, propriety be damned!

Despite his aunt's warning to stay away from the eccentric, vulgar Miller girl and her equally vulgar family, Winterbourne is determined to get to know Daisy better, if only to try to figure out what makes her tick, even taking her on an excursion to Castle Chillon. Since Winterbourne has to return to Geneva afterwards, the two plan to meet again in Rome. Winterbourne's enthusiasm for the plan fades, however, once he arrives and hears the scandalous stories of Miss Miller flirting with every man in Italy. When she dares to stroll along the Pincio with Winterbourne on one arm and her friend Mr. Giovanelli on the other and later brings Giovanelli to Mrs. Walker's party, her fellow Americans decide she has gone too far and actively begin to give her the cold shoulder, lest their European companions believe they approve of her behavior.

Winterbourne must resolve a dilemma: Is Daisy simply an innocent American girl worth thinking well of? Or is she really as senseless and vulgar as everyone says she is and not worthy of all the anxiety he suffers trying to figure it out? He finally decides she does not deserve his efforts to think well of her when he finds her hanging out with Giovanelli in the Colosseum in the middle of the night, which everyone knows is the perfect time for contracting the deadly Roman fever (malaria, transmitted chiefly by the mosquitoes that came out after dark). He insists he doesn't even care if what she told him about being engaged was true or a joke.

With all the misunderstandings, bad judgment and Daisy's clever wit, the scandal plays out like a typical romantic comedy. And then Daisy dies of Roman fever, and Winterbourne realizes too late that he was wrong about her, so he goes back to his older mistress in Geneva since it's too late for him to change. He has lived too long in foreign parts.

James and his friend William Dean Howells spent many a night banging their heads against the wall over how many American readers thought Daisy was an insult to Americans when, clearly, James was trying to insult the Americans who ostracized her just for not being a snob! Sadly, they proved James' point all too well, rejecting the bold girl as if they, like their counterparts within the story, "desired to express to observant Europeans the great truth that, though Miss Daisy Miller was a young American lady, her behavior was not representative — was regarded by her compatriots as abnormal."

Got a 1974 film adaptation directed by Peter Bogdanovich and starring Cybill Shepherd in the title role, with Barry Brown as Winterbourne and Cloris Leachman as Daisy's mother.

Daisy herself is an example of: