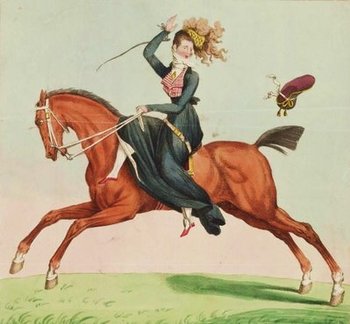 "On the outside, I was everything a well brought up girl should be. On the inside, I was screaming."
— Rose Calvert (Old Rose), Titanic (1997)
Advertisement:

There is a certain kind of character commonly found in historical fiction set in the nineteenth and early twentieth centuries (though she can appear earlier or later, too). Her literary ancestress can be found in some of the best-loved novels of the Regency and Victorian eras. She is the girl who bends the rules just a little. Oh, she can dance a country dance or pour tea with the best of them, but she may also be a good walker or horseback rider. She may be the most intelligent girl in the story, and she is almost certainly the wittiest and the most outspoken, sometimes earning her the title of spitfire. She may be talented in more practical ways, as well: if given the opportunity, she may turn out to be a wise investor, and she may harbor talent for music, writing, or art that goes beyond drawing-room entertainment and might become a means of financial independence if necessary. In rare cases, she may even solve a murder. Though she occasionally runs into some trouble, especially if she fails to obey the powers that be, she usually comes through in the end. She will be the Veronica of a Betty and Veronica love triangle, and the hero is likely to find her more enticing than her more docile sisters.

The Spirited Young Lady has the same grace and style as the Proper Lady plus an added spark of attitude or rebellion that is missing from her more-prim-and-proper literary cousin. This is what makes her such a popular character today: she is the character modern audiences can most admire or relate to. In historical fiction, she is likely to be a proto-feminist. In nineteenth-century literature, she may not speak out for women's rights generally (a few examples do), but she will speak out for her rights pretty clearly. Her willingness to say what she wants is part of what makes her stand out. In unskillful hands, such a character may seem anachronistic or may become a Sue, though there are many examples that are both believable and well-rounded.

Though the Spirited Young Lady is usually a heroine or positive supporting character, negative versions of this trope are possible. Only add such examples if it is clear that they are treated as spirited young ladies in-universe. If you're adding a villain or anti-hero as an example, please explain how she fits this trope rather than being just a period version of another trope.

Compare Rebellious Princess, who's of a higher social standing but may behave similarly. The Spirited Young Lady may also be a Plucky Girl and/or Well, Excuse Me, Princess!, but that isn't necessary to this trope. The Lady of Adventure practically has being this as a requirement. See also Yamato Nadeshiko, which can serve as the Japanese counterpart to either this trope or the Proper Lady. For ladies that hide their 'spark' in Politeness Judo and Passive-Aggressive Kombat, see Silk Hiding Steel. May overlap with Girliness Upgrade or Tomboy with a Girly Streak. She may grow up to be a Grande Dame and/or Cool Old Lady.

Compare and contrast with her descendants The Suffragette and The Flapper.