Literature / A Room with a View 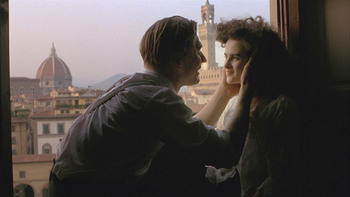 The protagonist is Lucy Honeychurch, a young English woman travelling to Florence for the first time during The Edwardian Era. She befriends the eccentric Mr. Emerson and his handsome, philosophical son George, and begins to feel confused about her feelings for the latter, especially when he kisses her in a violet field. When she returns to England, she begins an engagement with the conventional Cecil Vyse, who is very unlike George. However, soon she receives word that the Emersons have moved into a nearby cottage…

The story was adapted by Merchant Ivory into an award-winning 1985 film starring Helena Bonham Carter, Julian Sands, Maggie Smith, Judi Dench, Denholm Elliott and Daniel Day-Lewis. It has also been made into a stage play, a BBC radio series, and a 2007 film.

A Room with a View contains examples of the following tropes:

Alternative Title(s): A Room With A View