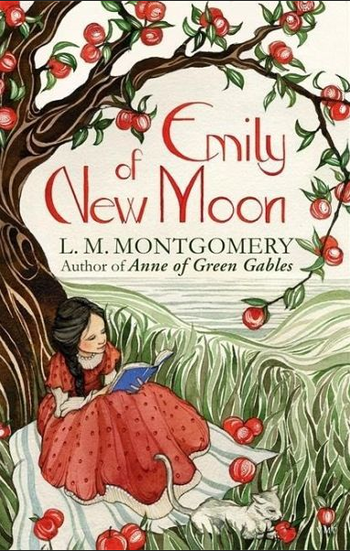 A trilogy of young-adult novels by L. M. Montgomery, her most popular books after the much more famous Anne of Green Gables series. These are also among the most autobiographical of her works.
Advertisement:

Little Emily Byrd Starr has everything she needs: her loving father, her wild imagination, her cats, and her constant friend the Wind Woman. But upon the death of her father, Emily must live with her mother's folk, the Murrays, a clan known for being old-fashioned and proud. Emily comes of age under the care of stern Aunt Elizabeth, gentle Aunt Laura, and peculiar Cousin Jimmy in the Murray homestead of New Moon, making friends, enemies, and a few beaux along the way. Most significantly, she develops her talents as a writer, which sets her at odds against the more traditional ways of The Clan. However, Emily can be dissuaded from that path no more than can the Wind Woman from her course. Maturity ensues.

There are two sequels, Emily Climbs, which covers Emily studying away from home and beginning to expand her writing career, and Emily's Quest, which covers her career's launch, the changing dynamics of Emily's circle of friends, and romantic complications.

Emily of New Moon has been adapted into two TV series: a live-action series in 1998 that ran for four seasons, and a 2007 anime series by TMS, the latter of which is notable for cutting Dean out entirely and giving Teddy much more focus and development, making his getting together with Emily in the end come off less like they were Strangled by the Red String.