Literature / An Ember in the Ashes 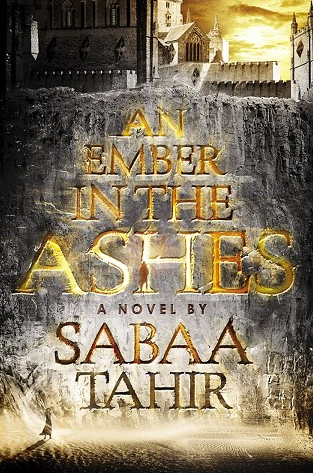 "You are an ember in the ashes, Elias Veturius. You will spark and burn, ravage and destroy. You cannot change it. You cannot stop it."
— Cain
Advertisement:

An Ember in the Ashes is a YA novel written by Sabaa Tahir, set in a world loosely based on Ancient Rome. Five hundred years ago, the Martials, a Proud Warrior Race, conquered the Scholars, a peaceful people. The Scholars have only known suffering and slavery at the hands of the Martial Empire and its ruling class. When Laia, a Scholar girl, witnesses her brother being captured by Martials, she turns to the Resistance, who offers her a deal: spy for them in the Empire's most brutal training academy, Blackcliff, and they will rescue her brother.

Elias Veturius is Blackcliff's finest soldier, and also its most unwilling. Before he can desert, he is summoned to participate in the Trials, a series of life-and-death ordeals to crown the new Emperor and his lieutenant. There, he meets Laia, and as they struggle to survive the brutality around them, their choices have the power to shape the fate of the Empire. Expect plenty of political and supernatural intrigue.

A second book, A Torch Against the Night was released in August 2016, followed by a third book, The Reaper at the Gates, in June 2018. A prequel trilogy of Graphic Novels began with A Thief Among the Trees in July 2020. The fourth and final book, Sky Beyond the Storm, was released in December 2020. Movie rights have been optioned by Paramount Pictures.