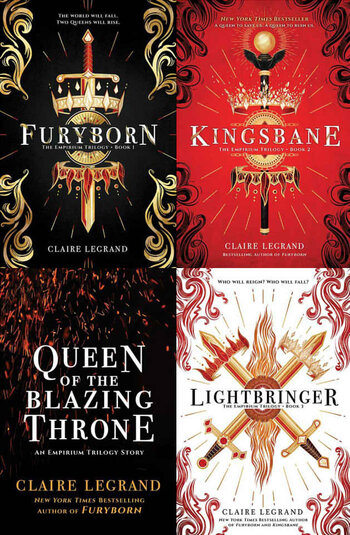 Being the Chosen One isn't all it's cracked up to be...
"The prophecy, this talk of a Sun Queen and a Blood Queen... it is folly. Humans aren’t all goodness or all badness, and reducing Rielle to this choice— presenting her with two impossible and inhuman extremes— is a terrible cruelty, and it will be our undoing."
Advertisement:

The Empirium Trilogy is a series of young adult fantasy novels written by Claire Legrand.

In a world where people can control only one element, Rielle Dardenne can control all seven. There are just two people who are said to possess such power: a Queen of light and renewal and a Queen of death and destruction. A prophecy foretells of their arrival but it doesn't specify which Queen will appear first. For all her father knows, Rielle could be either.

In an effort to keep her safe from such scrutiny, he forces Rielle to keep her powers hidden, only letting the most trusted individuals know. This works for eighteen years until Rielle sneaks herself into the annual horse race. During the race, a group of assassins ambushes Prince Audric, her close friend and crush. Without hesitation, she reveals her multielemental status, managing to save him but killing over a dozen innocent racers in the process.

Questioning her intentions and control, the King of Celdaria gives Rielle an ultimatum: she must face seven trials that will test her powers and morality. If she passes all of the trials, she will be deemed the Sun Queen, savior of the land. If she fails, she will be executed- if she can even survive the trials first.

Over 1,000 years in the future lives a young women named Eliana Ferracora. She keeps a powerful secret: she is nigh invulnerable. Cuts and bruises heal in the blink of an eye and even falling off a roof leaves not a scratch. This mysterious power is an asset given that she is a bounty hunter for the Undying Empire, a ruthless dictatorship that's taken over almost every kingdom.

When women and girls start to mysteriously vanish, Eliana suspects that the rebel group known as Red Crown is behind it all. After her own mother disappears, she crosses paths with the Wolf, a masked killer and right hand man to Red Crown's mysterious leader, the Prophet. The Wolf makes a deal with Eliana: if she joins him, he will help her find her mother. Knowing that this might be her only chance, Eliana accepts. Her missions with the Wolf slowly reveal a darker truth about the Empire and its leader, ones that will make Eliana question what she is fighting for as well as her own identity.

In a story that spans centuries, Rielle and Eliana's fight against the perils that threaten them begin to intersect. It is these connections that will ultimately determine the fate of their lives and their world.

"May the Queen's light guide these examples":