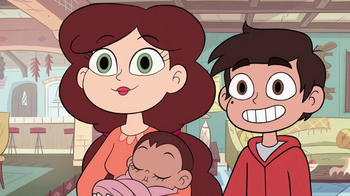 Mrs. Diaz and her two children.
"When I was 15, my sister was born. She was more like a daughter to me than a sister."
— Sora Inoue on Orihime, Bleach
Advertisement:

Siblings tend to be relatively close in age. But there's a wide period where someone can become a parent, which can result in decades of difference in age. One sibling may be in diapers when the other is already at university or even has children of their own. They're practically in different generations despite being from the same generation. This could lead to Big Brother Instinct, and for a slightly shorter age gap, Annoying Younger Sibling.

More often this is because they're half-siblings, with the younger sibling being the result of a May–December Romance on their shared father's part. Or they're full-blooded siblings, but one was born early into their parents' relationship (likely a Teen Pregnancy) and the latter in their late 30s/40s, maybe even 50s with an Absurdly Elderly Mother. Or long after having their first kid, the parents chose to adopt (or vice versa; parents who are having trouble having kids might adopt a child then later succeed in giving birth).

Because of the large age gap, the siblings are likely to have an estranged relationship. If they're close, the older sibling may be more of a Parental Substitute or uncle/aunt in their behavior, rather than a regular sibling interaction. This can also lead to an uncle/aunt around the same age or even younger than their nephew/niece, who if close might share a sibling or cousin-like bond. Maybe they'll make jokes about the situation.

Sometimes there is also a Plot Twist where it turns out the older sibling was really the parent and had the younger “sibling” at a young age.

If one of the parents is immortal, this is almost guaranteed, though the age difference might be so huge the older sibling died long before the younger was even born. Producing these is semi-expected for kings and general nobility, as it ensures there's no lack of an heir. It was also common before reliable birth control as people often married young and were expected to have a lot of kids (partly because of high child mortality rates). Likely to contribute to a Tangled Family Tree or get older siblings asked Is That Cute Kid Yours?. Contrast Absurdly Youthful Mother, where two different generations are a lot closer to each other than is expected, and Family Relationship Switcheroo, where someone pretends their child is a much younger sibling.

To qualify for this trope, there must be at least a decade between the youngest and oldest sibling.