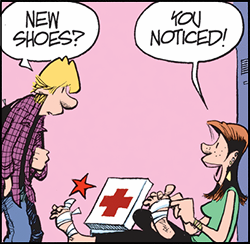 "Meg's high-heeled slippers were very tight and hurt her, though she would not own it, and Jo's nineteen hairpins all seemed stuck straight into her head, which was not exactly comfortable, but, dear me, let us be elegant or die."
— Louisa May Alcott, Little Women, "Chapter 3"
Advertisement:

Fashion is a funny thing. You'd think that people would want to wear garments, shoes, and accessories that were comfortable and serviceable, but as many a person with blistered feet can attest, clothing and footwear aren't always designed with comfort in mind. Some people protest and opt to wear only pain-free fashions. Others suffer because we must be elegant or die. Painful hairpins, ill-fitting shoes, scratchy sweaters, choking neckties, sharply pointed Victorian collars . . . oh yes, fashion hurts. Painfully, this is Truth in Television: the fashion-minded have choked, mutilated and even poisoned themselves in various ways as long as the concept of fashion has existed.

Though it's frequently played for comedy, this trope can also be invoked by a work in order to create An Aesop about the vanity of focusing too much on physical appearance at the expense of health or comfort, and often represents the trappings of societal norms. Refusing to wear the painful fashion sometimes becomes an act of rebellion; alternatively, those not wise enough to realize the absurdity of fashion may become the subject of ridicule.

See Of Corset Hurts for all corset or girdle-related pain, and High Heel Hurt for high heel-related pain. See Weight Loss Horror for other examples in which attempting to maintain appearance can have unfortunate consequences. Where this is intentionally done for the sake of asceticism or plain masochism, see Deliberately Painful Clothing.