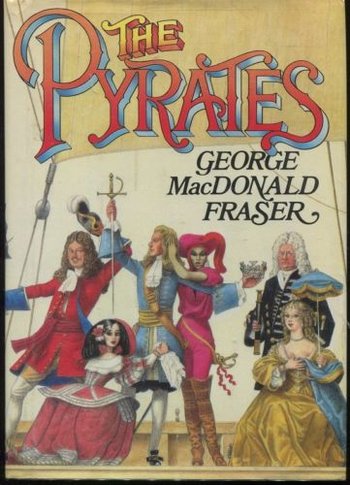 The Pyrates is a 1983 novel by George MacDonald Fraser and probably the single most deliberately Trope Overdosed work of literature in history. Fraser set out to tell every single pirate adventure story simultaneously, and he largely succeeded.

In brief, Captain Benjamin Avery, a classic hero, is commissioned to deliver the immensely valuable Madagascar Crown, but by sheer mischance, the ship is also carrying the notorious Colonel Blood and Sheba, the pirate queen. Pretty soon, Sheba's five fellow pirate captains rescue her, and discover the Madagascar Crown, which conveniently is easily split into six jewelled crosses, one for each captain. Avery and Blood are left marooned, facing certain death.

After their inevitable escape, Avery announces he will single-handedly wipe out all the pirates, and recover the stolen crown, but ends up accidentally abducting a noble Spanish lady, on her way to marry the loathsome Don Lardo. Much excitement later, Avery ends up leading the pirates in a climactic battle against the Spanish. The Crown is recovered, the pirates escape with a boat full of Spanish gold, and Avery gets the girl. Admittedly, the other two women intent on claiming him might prove a problem, but he is a hero and a gentleman.

Not to be confused with Pyrates (which lacks "The".)

The novel features notable examples of: