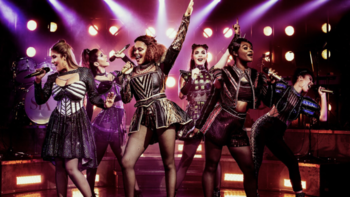 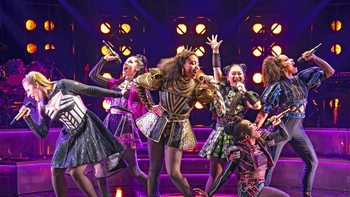 Six: the Musical is a musical written by Toby Marlow and Lucy Moss. The idea came to Marlow whilst studying in his final year at Cambridge University, and despite uncertainties from collaborator Moss, the pair wrote the musical whilst studying for their final exams. The musical premiered Off-West End at the Arts Theatre in 2017 before going on a UK Tour the following year. It re-premiered at the Arts Theatre in January of 2019 and made its United States debut at the Chicago Shakespeare Theater in May of 2019, with that production moving to Boston that August. That production's cast has moved to Broadway at the Brooks Atkinson Theatre with previews beginning on February 13th, 2020. Opening night was originally set to be March 12, 2020, but unfortunately, the shutdown of Broadway caused by the emerging COVID-19 Pandemic left the musical's fate uncertain for a good long while. It was eventually announced in May 2021 that Six would resume previews on September 17, 2021, with its official opening set for October 3.

Six has been nominated for five Olivier Awards, including "Best New Musical."

The musical is presented as a pop concert featuring the six wives of Henry VIII in a competition as they each recount their lives leading up to their marriage and their inevitable demise. The Queen with the worst time with Henry will become the group's lead singer.