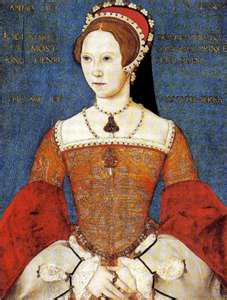 "My soul is God's and my faith I will not change."
"I say to you, on the word of a prince, I cannot tell how naturally the mother loveth the child, for I was never the mother of any; but certainly, if a prince and governor may as naturally and earnestly love her subjects as the mother doth love the child, then assure yourselves that I, being your lady and mistress, do as earnestly and tenderly love and favor you."
— Mary I, rallying Londoners to oppose the Wyatt Rebellion against her marriage to Philip of Spain, 1 February 1554
Advertisement:

England's very first undisputed queen regnantnote Matilda, during the brief period when she had enough support and control over England to "reign", did so as Lady of the English as there was fervent opposition to her taking the title of queen, and of course Lady Jane Grey's assumption of the throne was treated as a usurpation by just about everyone outside her inner circle; see below for more on that, Mary I of England (18 February 1516 — 17 November 1558; reigning July 1553 — her death) was Henry VIII's elder daughter and his only surviving child by Catherine of Aragon. As a little girl, she was doted on by her parents, but that changed when Anne Boleyn became queen. With her parents' marriage declared invalid, Mary was declared a bastard, struck from the succession, stripped of her title as "princess", separated from her mother, and eventually forced into her baby half-sister's service as a lady-in-waiting. She was eventually restored to the succession after her younger brother Edward, although she remained legally illegitimate and was styled "the Lady Mary," rather than "princess."

Like the rest of the Tudors, Mary was very intelligent and well-educated, but she never showed the same zeal for learning as Elizabeth or Edward. While she lacked the charisma that characterized her father and sister, she was capable of inspiring great loyalty, especially among her friends and servants. A very generous, motherly woman, Mary was often asked by friends to stand godmother to their children, and also acted as a substitute mother figure to her much younger siblings (neither of whom ever knew their own actual mothers).

Her path to the throne did not run smoothly. Edward unexpectedly changed the succession in a will drafted shortly before his death that excluded both Mary and Elizabeth from the throne in favour of the Lady Jane Grey, granddaughter of Henry VIII's sister Mary Tudor and daughter-in-law of the Duke of Northumberland, the regent.note This stunk so highly that a rumour arose claiming that the Duke himself wrote the will and forced the sickly Edward to sign it. An early draft of the will found in Edward's papers, however, shows that the devise was Edward's own idea. Queen Jane took the throne on Edward's death, but Mary's overwhelming popularity with the commoners and nobles made Jane's position untenable, and Jane was deposed by Mary nine days later. Mary was greeted by crowds of thousands of cheering subjects as she rode into London and took her rightful throne.

Her original intent was to punish only those she saw as responsible for the near-usurpation of the throne - mainly the Duke of Northumberland and his cronies - and release the comparatively innocent Jane and her husband Guildford Dudley as soon as the situation had stabilized; she wasn't stupid enough to truly consider either of them as the leaders of the coup - Jane was a sixteen year old bookworm, after all! Unfortunately for Jane and Guildford, a rebellion led by Thomas Wyatt with the intention of restoring Jane to the throne forced Mary's hand and led both of them to the block.note The execution of frail, beautiful, teenaged Jane Grey was a popular theme for Romantic painters.

As a devout Roman Catholic, Mary was determined to bring England back into the arms of Rome. She chose a Catholic husband - Philip, King of Naples and the heir to the throne of Spain - and brought her cousin Reginald Cardinal Pole back to England as Archbishop of Canterbury. Philip was named King of England and Mary's co-monarchnote (Though titled as king per common law that a husband was entitled to share in his wife's lands and titles, legislation passed by Parliament reserved most power for Mary, leaving him as a glorified consort.), and as such worked with Parliament to repeal the Protestant laws passed in the time of Henry and Edward and reinstate the Heresy Acts. Mary ordered the burning of many Protestant recusants pursuant to these Acts, including bishops Ridley, Latimer, and Cranmer. These men and women became known as the "Protestant Martyrs". There were 283 of them in all, and it is for their deaths that she's known as Bloody Mary (a term coined well after her death).note In reality, she killed fewer subjects in her entire reign than her father did in any single year of his. Shows what happens when you're on the wrong side of history.

She might have succeeded in returning England to Catholicism had she borne a child to carry on her works, but that was not to be. She is thought to have become pregnant once, but although her abdomen swelled she never delivered a child. The most likely explanation is a molar pregnancy proceeding to choriocarcinoma, but some medical historians believe it was ovarian cancer. It was once suggested that she might have suffered a "phantom pregnancy",note this shows up often in books and shows of the 1950s but modern historians are confident that her condition was primarily physical in nature, as phantom pregnancy is far rarer in real life than doctors of the 1930s realized. Also it isn't fatal.

By the time Mary died in 1558, the crowds who cheered her five years earlier were heaving sighs of relief at her passing. She died unmourned, unloved, and unrepentant to the last. Her great ally Cardinal Pole survived her by only twelve hours; with the two of them dead, any chance of a restoration of the Catholic faith. She was succeeded by her younger half-sister, Elizabeth.

Portrayals of Mary Tudor in fiction: