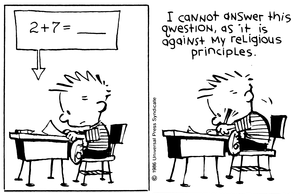 "It's worth a shot."
"Sweating is against several of my religions!"
— Cheerleader, Teen Girl Squad
Advertisement:

Describe Against My Religion Here, unless describing tropes is forbidden by your creed.

Being tolerant of one another's religious beliefs is very important (in many 20th & 21st century cultures, at least). In works created by people from those cultures, if someone says something is against their religion, other characters think they can't make them do it. Now that person might be telling Blatant Lies to get out of doing that thing, but it might be the truth. Other characters are likely not going to press that character about it.

If the character is trying to make a point in The War on Straw, or simply Hiding Behind Religion to avoid some unpleasant obligation, they may invoke (or create) a Parody Religion that just so happens to be against the thing they don't want to do. Freedom of religion does entail that you are legally allowed to hold any creed you choose to believe so Loophole Abuse may ensue.

Comes up a lot with someone raised Catholic, Good Girls Avoid Abortion in particular. Of course, in Real Life, many practices considered common by the majority may be expressly forbidden to people of a particular religious group. A common loophole use of this in real life is that some religions believe people have intellect, guardian angels, or a conscious that enables them to judge things as wrong that are not explicitly banned by their religion, and then requires they do what they think/feel/believe/know is right. Therefore, they are able to attribute their personal judgment as religious mandates.

Keep in mind that most religions, especially the Abrahamic ones, view not doing what you can to survive as a greater sin. If it comes down to starving or eating non-kosher/halaal food for example, the religion expressly commands you survive.

In fantasy and sci-fi settings, religious mandates of various kinds may lead to Fantastic Religious Weirdness, depending on just what those mandates and restrictions are.

Alternative Title(s): Its Against My Religion